We are speculating at the moment on exactly which engines Toyota is going to offer in a marinized version. The two quotes we have from Toyota are given below.

" In addition to marketing cabin cruisers, the automaker will sell a pair of marine engines based on engines used in its Hilux Surf (4Runner) and Celsior (Lexus LS 400). "

Using the above information we were able to find information on the Lexus LS 400 on the Lexus web site (www.lexususa.com) which is presented below. CARMAG, (www.carmag.co.jp), a Japanese web site covering the auto market in Japan which we have used several times before says the diesel engine option (1KZ-TE engine) in the Hilux Surf is a 3.0 Liter Diesel Turbo and provide the photo below.
1KZ-TE 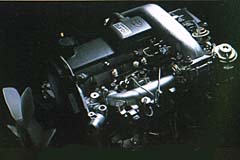 Toyota of Australia, www.toyota.com.au, provides the current specs on the 1KZ engine.